Neem.fr is a website for nature enthusiasts actively supporting the development and use of Neem. We promote public and professional awareness of Neem's many possible applications.

The Neem in the world

The international network of the Neem was set in 1194. It centres its activities on exploring and evaluating the genetic diversity of the Neem. Some national institutes in 23 countries in Asia, Africa, Latin America and Europe take part in the network activities. The general coordination is secured by the Department of the Forests, the FAO (Food and Agriculture Organization of the United Nations). The technical medium that is to say the engineers and the laboratories, is secured by the Danida Centre of the Forest Seeds (DFSC), now incorporated to the Forest and Landscape Denmark (Danish Centre independent of the Copenhagen University (UC) for the forest, landscapes and the planning). 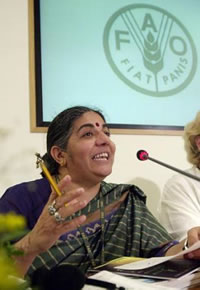 An expert group of the FAO of the forest energy resources recognized the real value of the Neem and its potential. He cited it among the species which deserve the absolute priority for the tropical countries in the dry area.
Thanks to its good adaptation to the hot and dry climate, this tree became one of the most commonly planted species in the dry and semi-dry areas. We find the Neem tree in its native country (India) but also in Africa, Latin America and in the Caribbean Islands.
In the African Sahel, the Neem is planted mostly as a shade and windbreak tree. It is also used in the production of firewood and in the manufacturing of local medicines.
In India, the neem extracts are usually used as a medicine but also as a pesticide/insecticide.

Several public organizations, private associations, ONG and individuals support the development of the research on the neem and its cultivation. Numerous works are in progress about the use of the neem’s natural extracts and chemical substances for industrial uses. We study their pesticidal properties in order to encourage its use by the farmers and the rural areas of the developing country.
It is important to highlight that, besides its pesticidal properties, the neem is polyvalent specie used just as well for the conservation and the doing up of the environment and the improvement of the soils, that as charm and shade tree.

In Brazil, all the fruit and vegetable producers but also all the distributors of farm products know the neem. Since 2001, we use it frequently to cure the animals and for the agriculture.
More infos...

The azadirachtin extract contained in the neem’seeds was very efficient against the larva that were destroying the foliages, against 13 species of lepidopterous insects and against sawflies.
More infos

When the tree reaches maturity, it can produce until 50Kg of fruits what is equivalent to 30Kg of seeds. These ones constitute the main source of components with some insecticidal properties as the azadirachtin. However, the quantity of azadirachtin contained in the seeds considerably changes according to the climatic conditions, the soil conditions and the genotype of the tree (Ermel 1986 ; Singh 1986).